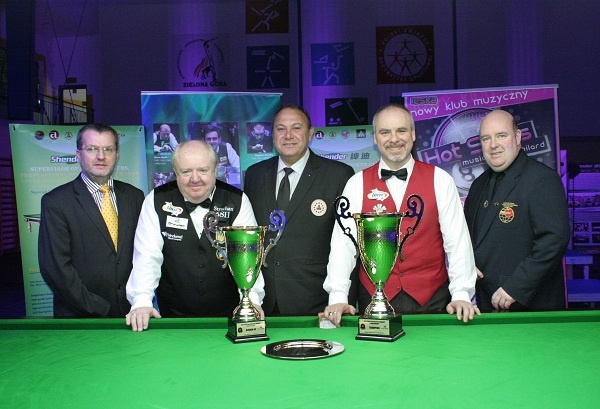 Darren Morgan retained his European Masters Title this afternoon in Zielona Gora beating Alan Trigg 6-3 in a superb final where Alan certainly put it up to Morgan. The final was played in the superb venue on the table next to the men’s table which was being broadcast live on Polish TV.

Alan started the final strong taking the first frame 87-34 but a 69 break in the next leveled at 1-1 and Alan pulled away again taking the 3rd frame 77-33. Morgan leveled the scores yet again winning the fourth frame on the black but Trigg took the lead yet again thanks to a break of 49.

Morgan however stepped it up a gear and took the next two frames with ease with the help of breaks of 40 and 70 and then extended his lead to 5-3 on the black despite Triggs effort of 41 to leave him only one frame away from victory.

An effort of 40 in the final frame helped seal the win for the Welshman as he lifted the cup yet again after a long two weeks of play where he dominated the high break board a super total of 28 breaks over 40 including two superb centuries, a 124 and 130.

Darren will be officially presented with the cup later on this evening at the closing ceremony in which will take place in Palmarnia Restaurant in the centre of Zielona Gora.