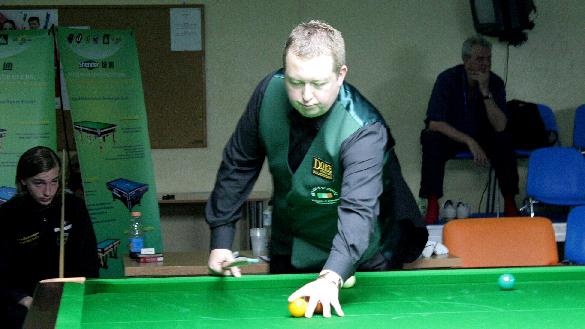 It was the youngster who opened the match strong with a great 65 break however Murphy’s 51 was good enough to take the second frame and the duo matched each other frame by frame to draw level at 4-4 with all other matches finished for the night.

Murphy eventually ran out a 5-4 winner after controlling the final frame and closing it out 61-3 to seal his place in the quarters and what should be a great match against England’s John Whitty.

Belgium’s Peter Bullen also reached the quarters with a 5-3 victory over England’s Jeff Cundy fighting back from 3-2 down to take the final three frame with ease and will now face Robin Hull who was in superb form all week.

The other match to finish tonight saw England’s David Lilley hold on to win despite a spirited comeback from 3-0 down by Kamil Zubrzycki the young 16 year old Polish player.

Kamil who is only playing three years played a superb tournament overall and put up a great fight tonight as he fought back to 3-2 before Lilley extended his lead to 4-2.

The polish player then responded with a superb 87 break but Lilley showed his experience in the next to seal the match. and will now face Gareth Allen from Wales.