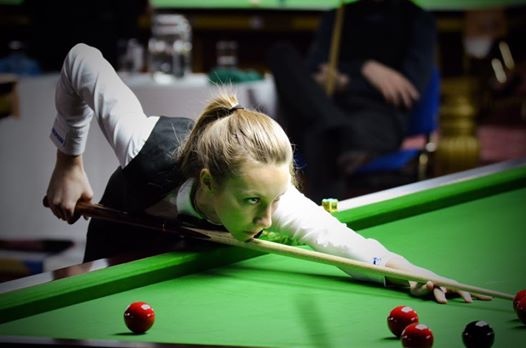 Competition in 2015 European Snooker Championships is very even on Ladies event: with two or one match to be played in round-robin stage, ten of the players already booked their places in first knock-out stage, Last 16. But there are still six golden tickets to share among the 28 present in Prague, and nine still struggle to go through.

In Group A, Wendy Jans (Belgium, +15 in frame difference) rocks without conceding a single frame in five straight wins, with Yana Shut (Russia, +5) also more confortable. However, another three ladies battle for the two seats: Malgorzata Sikorska (Poland, -1), Irina Gorbataya (Russia, -1) and Christelle Pedat, from France (0). Wins decide who goes through, but also frame difference, in case it is needed.

Latvia’s Tatjana Vasiljeva (+10) and Russia’s Yana Shut (+5) are flying in Group B, where four other ladies struggle for their chances of getting one of the two still empty chairs: Jennifer Zehentner (Germany, +1), Claudia Weber (Switzerland, -1), Anastasija Singurindi (Russia, -2) and Valerie Savonet (France, -2).

In Group C, the four players to go through seems to have been found too early: Daria Sirotina (Russia, +12), Melissa Eens (Belgium, +5), Eva Maskova (Czech Republic, +2) and Diana Schuler (Germany, +2) are too ahead of the remaining.

To follow close is the situation on Group D, where Anastasia Nechaeva (Russia, +11, pictured) and Nikoleta Nikolova (Bulgaria, +5) got a good advantage until now, but four play for two empty seats: Diana Stateczny (Germany, +1), Emesé Várady (Hungary, -1), Tam Dan Tach (Denmark, -2) and Manon Melief (Netherlands, -2) are in the situation room. It will be a close race, until the last ball on the table.