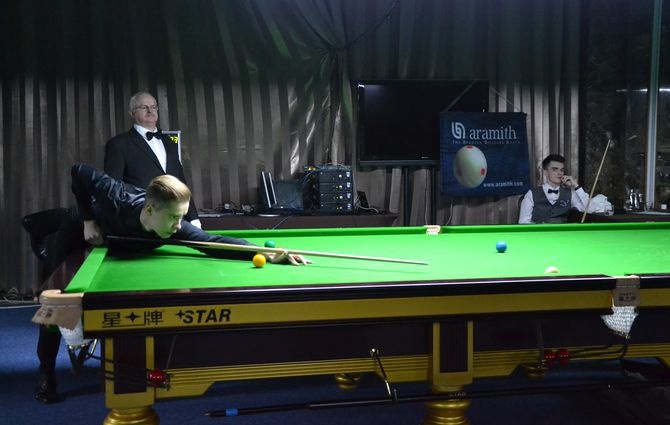 As the competition warms and the knock-out stages gets closer in 2016 U21 EBSA European Snooker Championships – round-robin stage ends Wednesday morning, with still a lot of empty seats for Last 64 -, Poland, playing at home, starts to show its own particular power, from a school who has developed remarkably since 20 years.

Kacper Filipiak leads in Group A, while Patryk Maslowski [pictured] is also very well positioned in Group D and Mateusz Baranowski sails for next round in Group F. The three main polish musketeers to face England’s army, also promising in U21 competition.

Brendan Sargeant is confortable in Group G lead, Ashley Carthy got three wins out of three matches in Group C, the same as Joe O’Connor in Group H or William Lemmons in Group J and Louis Heathcote in Group P: it’s England doing some steam since the beginning, and telling the home team they’re going to be hard to beat.

Alexander Ursenbacher (Switzerland) shines in Group E, while the author of the best break, so far, in this 2016 EBSA U21 and U18 European Championships, Lukas Kleckers (Germany, 94 points break on a Monday’s match) rules on Group R of U21 event.