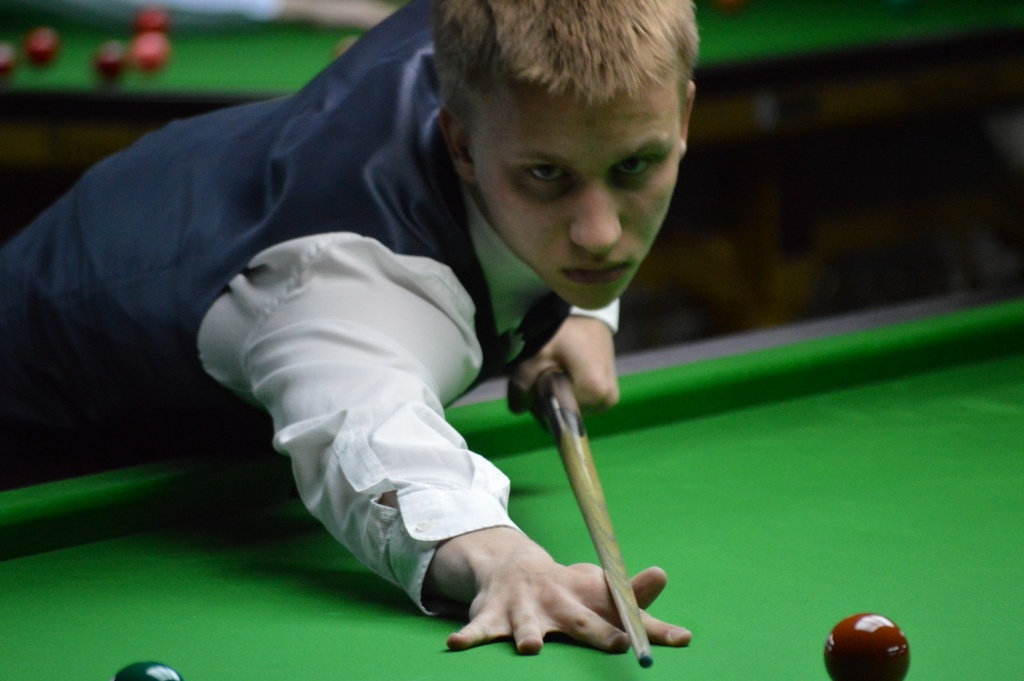 We had 15 matches in the mens event tonight for the 7pm session which ended up running late with two matches inparticular going all the way to the wire. Both Polish players, Mateusz Baranowski and Kacper Filipiak were brought all the way to the deciding frames by Bratislav Krastev (Bulgaria) and Felix Frede (Germany) but managed to get over the line to win 4-3.
Despite an 88 in the second frame for Frede, Filipiak took a 3-1 lead early on only for Frede to fight his way back thanks to a 54 in the 5th frame and won the next on the black to draw level. The final frame then went all the way with Filipiak winning eventually on the pink ball to take the match and his second win of the tournament. 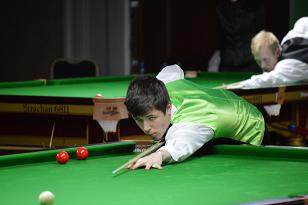 The other match saw Baranowski take an early 2-0 lead but the Bulgarian fought his way back to 2-2, they then shared the next two frames but it was the young Polish player who held his nerve and eventually ran out winner to make it two wins from two in Group H.
Also in Group H Antonis Poullos had a much easier time of things tonight as he saw off Jakub Rendla by four frames to nil to pick up his first win with a solid 75 break in the first frame.
In Group J Jason Devaney played his first match of the event after he got a walkover yesterday and he made easy work of his 4-0 win over Bulgaria’s Mihail Angelov with breaks of 59 and 65 along the way. Also in this group Gareth Allen picked up his second win with a 4-1 win over Markus Pfistermüller with a 60 break in the first frame included.
John Whitty also had a solid 4-0 victory over Sigurour Kristjansson finishing off strongly with breaks of 65 and 61 while Sascha Lippe also banged in a couple of 50+ breaks in his 4-2 victory over Kirill Lomakin from Russia.
We also saw wins tonight for Gary Thompson, Paul Schopf,  Joris Mass , Ex-Champion Kevin Van Hove and Zsolt Fenyvesi who knocked in a great 85 break in his 4-1 win over Ivan Kupov.
As the days fly by we are getting a better picture of who will be contesting the top spots in the group but with 4 places up for grabs in each group everything is still to play for for all the players. We will of course start to see the top seeds face each other over the next few days for what should be some superb matches.
Mens Results
Antonis Poullos 4 : 0 Jakub Rendla
Mateusz Baranowski 4 : 3 Bratislav Krastev
Jason Devaney 4 : 0 Mihail Angelov
Gareth Allen 4 : 1 Markus Pfistermüller
Kacper Filipiak 4 : 3 Felix Frede
Gary Thomson 4 : 2 Danni Bismoot
Sascha Lippe 4 : 2 Kirill Lomakin
John Whitty 4 : 0 Sigurour Kristjansson
Paul Schopf 4 : 1 Danny Eriksen
Zsolt Fenyvesi 4 : 1 Ivan Kupov
Callum Downing 4 : 0 Craciun Sorin
Kevin Van Hove 4 : 2 Paul Croitoru
Joris Maas 4 : 3 Tomas Puodziunas