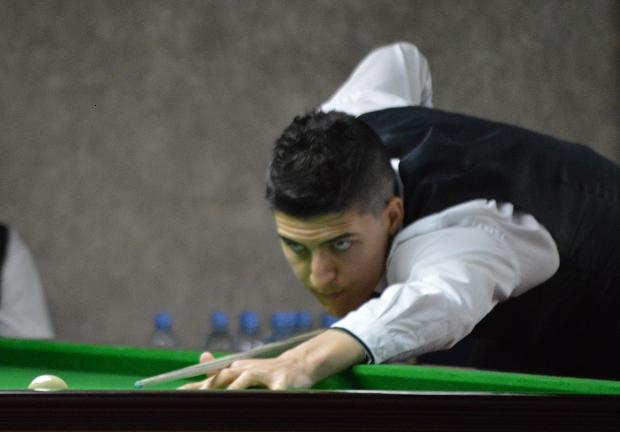 A great result for the host country this afternoon as Bulgarian player Ivailo Pekov came back from 4-0 down to defeat Scotland’s Gary Thomson 5-4 in the Last 32 of the Mens Event.

Pekov will now face England’s Nick Jennings in the next round after he finally overcame Poland’s Grzegorz Biernadski 5-4 here this morning after a back and forth match in which the Polish player took the first two frames only for Jennings to level the scores at 2-2.

Grzegorz then took the next two frames again to lead 4-2 but the Englishman took the next three frames on the bounce to seal the win taking the final frame 107-6 with the help of a 57 in the last. 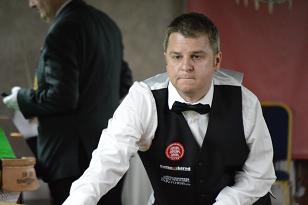 Also in the bottom half of the draw England’s John Whitty (Pictured) will face Ireland’s Jason Devaney in the Last 16 tonight after he came back from losing the first frame against Belgium’s Kevin Van Hove to take the next five frames and the match 5-1. Devaney beat Cypriot Antonis Poullos 5-1 with high runs of 50 and 57 along the way.
Kristján Helgason knocked in a 71 break in the first frame this morning against Cypriot Anthony Brabin but the rest of the match was a bit more scrappy with the Icelander running out a 5-2 winner. Helgasson will now face Scotland’s Eden Sharav in the Last 16 later on tonight after Sharav knocked in breaks of 89, 65 and 58 against Poland’s Adam Stefanów this morning.
The final match in the bottom half of the draw tonight will see Ireland’s Rodney Goggins and Israel’s Shachar Ruberg go head to head. Rodney rattled in breaks of 50, 52, 53 and 59 during his 5-1 victory over Northern Ireland’s Raymond Fry this morning while Ruberg nearly let a 4-1 lead slip against Callum Downing until he rallied to win the 8th frame 60-37 and take the match.
The Last 16 will take place at 7pm tonight.