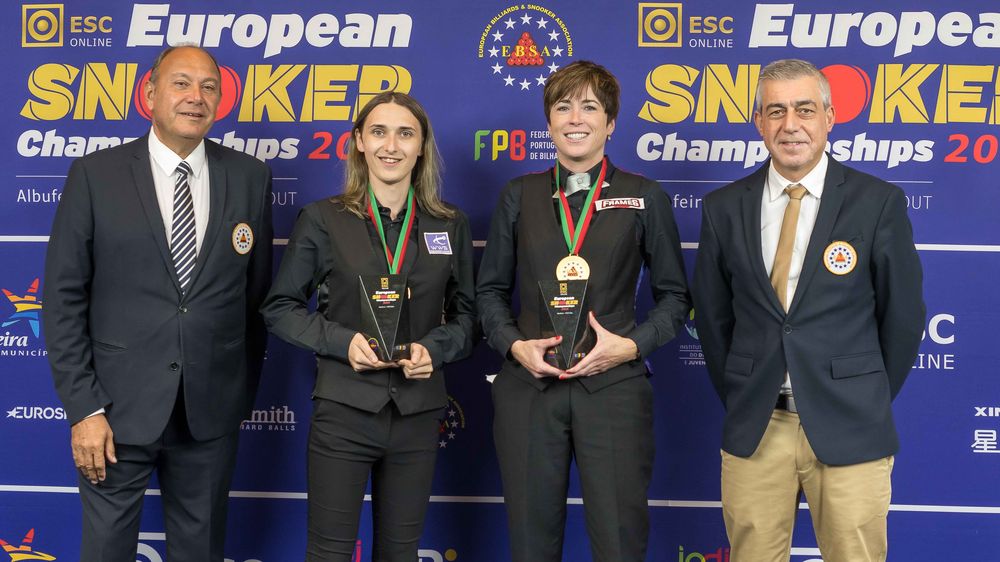 Belgium got their 3rd gold medal at the 2021 edition of the championships with the pair Kevin Hanssens and Julien Leclercq beating Welshmen Darren Morgan and Elfed Evans by 5 frames to 2. It was the third final for Leclercq and his 30th match in 4 events (also played Men/Mixed, lost in Last 16 round).

Aged 18, Julien got two silvers in U18 and U21 events, and now the gold, and no one has played more matches in Albufeira this 17 days since October 2nd.

In the Women Teams final, Jamie Junter and Marie Talbot-Deegan got the better over their fellow countrywomen Rebecca Kenna and Emma Parker in the decider (3-2) in a all-England final. Like Belgium, the Three Lions got a total of 6 medals in Albufeira out of 9 events: 2 golds, 1 silver and 3 bronze ones)

Last but not least, in the Seniors Teams event, Frank Sarsfield and Mark Tuite made Ireland proud beating Malta’s pair Duncan Bezzina and Philippe Ciantar by 5 frames to 3 in the last match to end after 17 days at Salgados.

EBSA President Maxime Cassis and Portuguese Billiards Federation President and EBSA vice-president Ricardo Salgado thanked everyone for their effort to make this championships a success, at the Official Closing Ceremony of the 2021 EBSA European Snooker Championships, deliver the last trophys to the three winners and runner-up’s from this Sunday.

Maxime Cassis announced also the nomination from EBSA for the 3 winners of the Teams events to play in the next World Teams Championships, before referees, staff, guests and officials enjoy a sunset cocktail at the terrace and a mostly deserved relax after 17 days of matches in Albufeira.