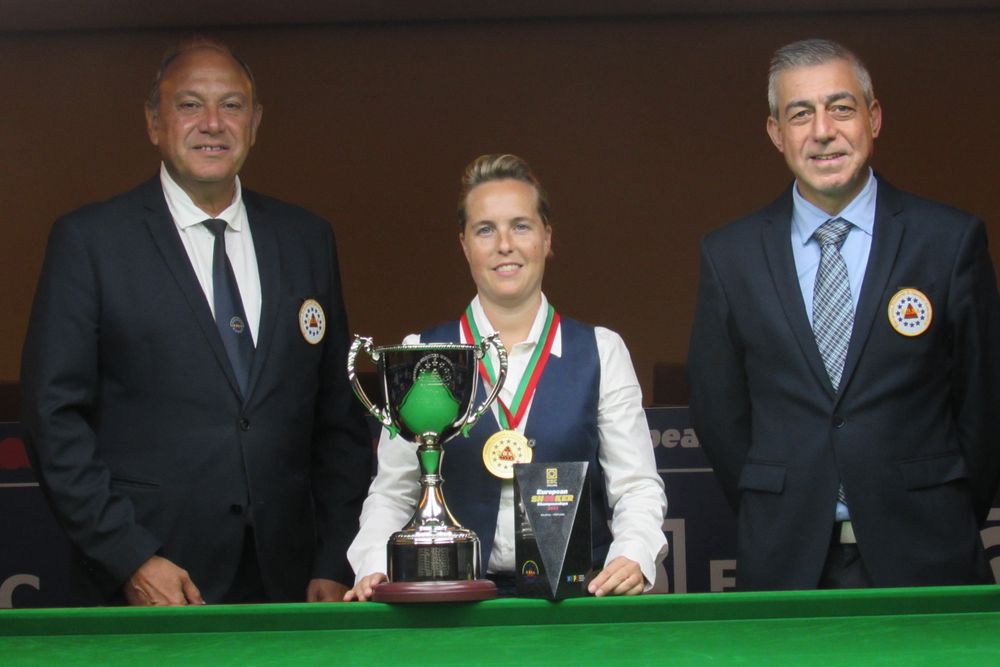 Wendy Jans is the new European Champion, for the 13th time in her career, after defeating England’s Jamie Hunter in the Women event final of Albufeira’s 2021 EBSA European Snooker Championships at Albufeira’s VidaMar Hotel Resort Algarve by 4 frames to 1.

The 38 years old Belgian player ended the big clash – the 20th EBSA European Snooker Championships Women event final in her career since 1999 – in nearly two hours at Salgados and reveled the «extreme happiness» to do it again because in 2020 due to the pandemic the event did not take place.

«I love to play, and I keep going. I want to thank everyone for this lovely place and event, I wil definitively go back to Portugal, it is the perfect ending», Wendy Jans said at the venue already with the trophy on her hands.

She is the 6th European Champion crowned in 2021 in Portugal, after fellow countryman Ben Mertens in the U18, Welshman Dylan Emery in the U21, Estonian Andres Petrov in the 6 Reds event, England’s Oliver Brown at the Men/Mixed event and, like Wendy Jans, another phenomenon at EBSA Championships, Welshman Darren Morgan win Seniors event also previously this Friday morning defeating Ireland’s Frank Sarsfield by 4 frames to 1.

The final was refereed by Portugal’s Miguel Santos. Now that the two days finals are over, exclusive attention to the other 3 Teams events matches also on the run at Salgados: Men, Seniors and Women. The 3 last finals at VidaMar Hotel Resort Algarve are scheduled for Sunday morning.